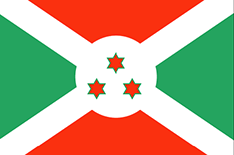 -
Secular holiday : In tribute to former president Cyprien NTARYAMIRA who was killed 2 months after his election on April 6, 1994