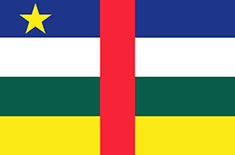 Please note that authorities may take last-minute decisions; please double-check if this information is vital to you
Make a Paypal donation of euros 10 to [email protected] to purchase the full calendar for the Central African Republic schools
Contact [email protected] to purchase a file containing confirmed calendars of 550 countries and regions.

-
Secular holiday : Anniversary of the death of Barthelemy Boganda, the first president of the nation, in 1959

-
Muslim, Sufi : End of Ramadan (may be changed to the nearest day)

-
Secular holiday : Initiated by President Bozizé - an Evangelist -- in 2002 Paid holiday when falling on Saturday or Sunday